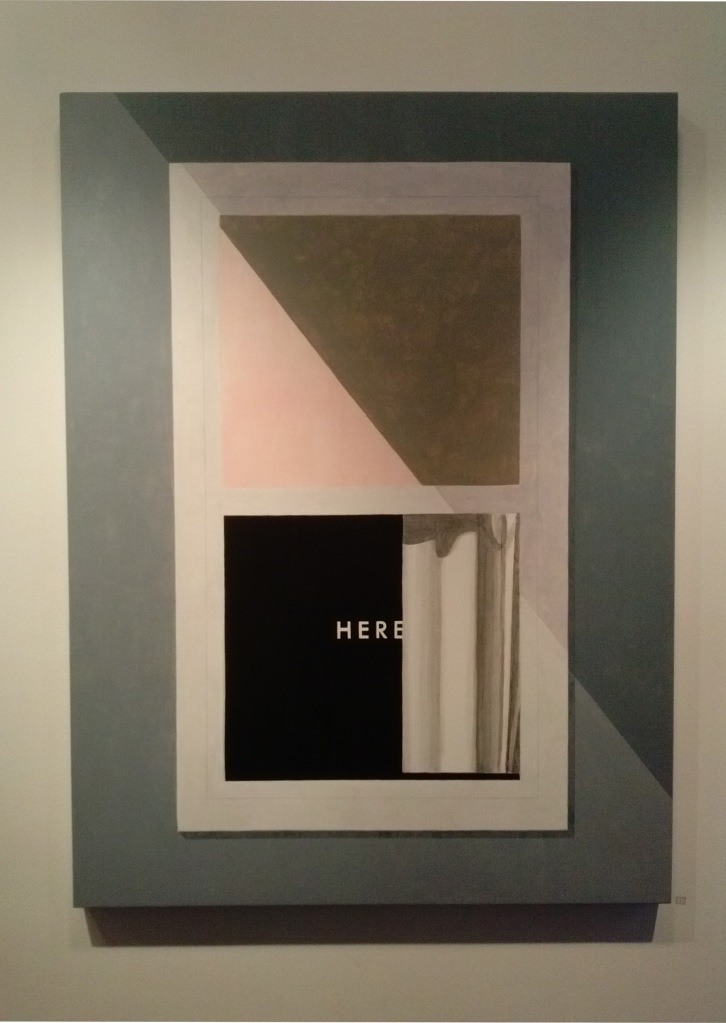 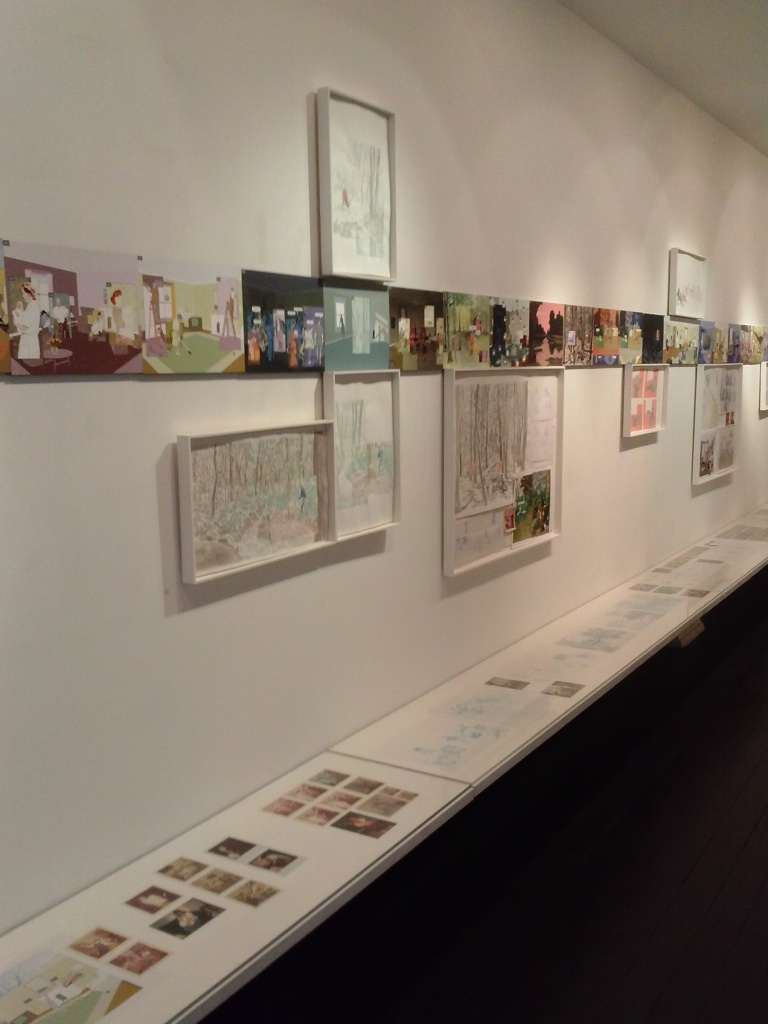 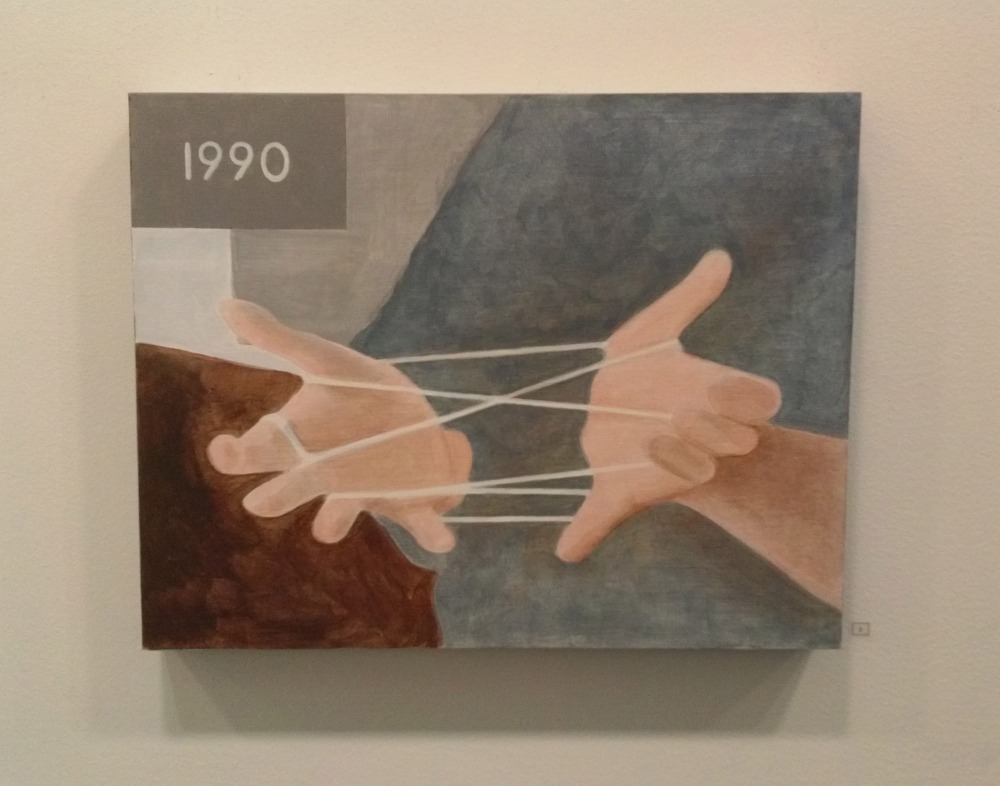 If you’re looking for French-language comics in Paris you have a lot of options. There are bookstores everywhere, and most (if not all) of them carry comics. There are also a myriad of bande dessinée specialty shops and boutiques, a whole district devoted to such shops (Rue Dante), as well as flea markets and antique malls. The options can be a bit overwhelming, and would definitely require more than one little blog post to capture the landscape. My most recent pass through Paris was brief (and my suitcase space is limited), so I chose to focus on a small press boutique that came highly recommended to me by my local friends. As a means to focus my endeavor, I was on the hunt for comics and zines of the small press and  short run variety, and Le Monte-en-l’air did not disappoint. 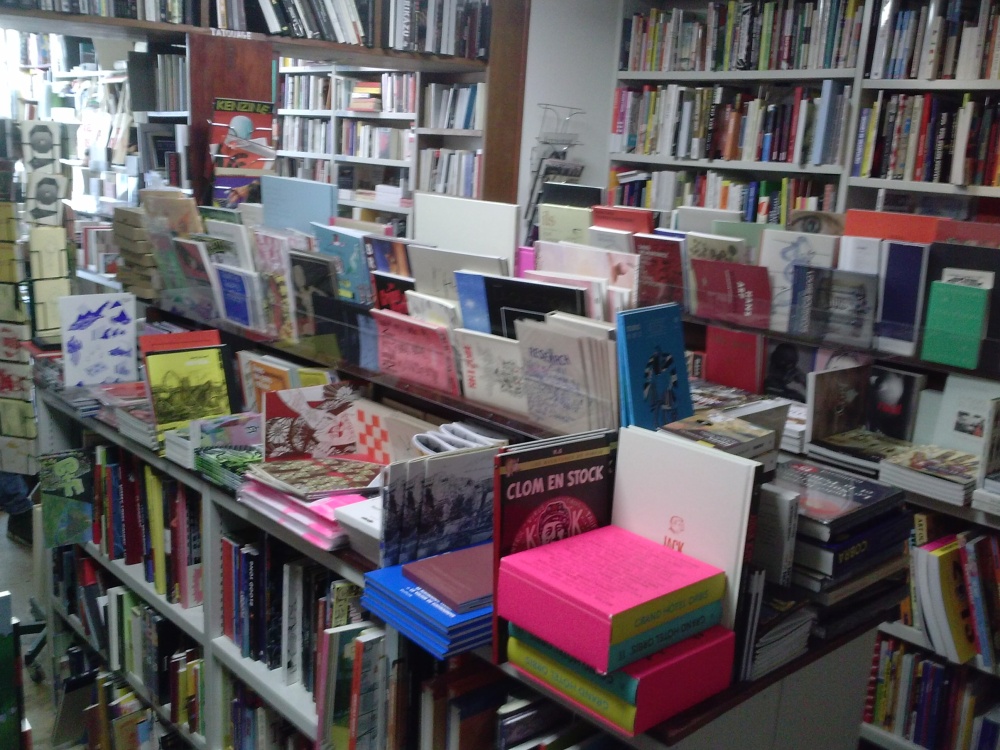 Just look at all these comics.

I saw briefly the print, art, and children’s book rooms, but did not have the full day needed to comb through the massive inventory of this shop, so I headed straight for the comics room. Even here, I had to set perimeters—focused searching—in order to make it out with finances intact. This room was stuffed to the gills with one of the greatest concentrations of Europe’s best small press comics and zines I have seen yet. Not to mention, they have a killer blog. Definitely leave yourself some time for this place.

For quick reference to the above-mentioned spot, check out the itinerary section of the blog.

Few are better at creating alternate universes than that of Franco-Belgian comics visionaries François Schuiten and Benoît Peeters. With a keen focus on the culture, politics, and architecture of these places, they have been exploring the themes of changing urbanism amidst neo-futuristic fantasy landscapes, set on their own version of earth, for the last 35 years. Each volume of the series takes place in a different city, with its own distinct infrastructure; with their latest installment of the Les Cités Obscures series, Revoir Paris (Casterman, 2014), the duo gives the French capital their own elegant, science-fiction makeover. In conjunction with this release, the Cité de l’Architecture et du Patriomoine has invited them to curate a show to host their vision, a vision well-supplemented with the work of Paris’ legacy of innovators. Part art exhibit, part speculative installation, there is as much attention given to the city’s history of urban planning and design as there is to fantasy and utopian daydream. This past weekend, I had the pleasure to indulge my fancy and take it all in.

From the moment I had entered the exhibit room, I could tell that everything I had read about the show had been regurgitated from the press release. These reviews made no mention of the overwhelming ambience—the mood created by the layout, the lighting, and the minimalist, atmospheric soundscapes—that subtly filled in the gaps of the room not occupied by art or installation. All of these elements combined to create, very appropriately, what felt like a vault in time. As viewers, we were isolated from the outside world and left only to focus on these concepts, which in their own ways could just as easily be thought to forecast certain visions—both realized and not—of the future of civilization itself. It was most effective.

The original artwork of François Schuiten was displayed in rows in the middle, where visitors could view the incredible draughtsmanship up close—deftly composed, meticulously executed, and elegantly hand-colored. Schuiten has an amazing knack of maintaining the scope of his worlds by always leaving the grandeur right outside the window; while his stories are filled with a great deal of intimacy, one never forgets that just beyond the frame lay a sprawling, sometimes incomprehensible city, one that is not afraid to tempt both the limits of horizon and sky above. This section contained nearly 100 original compositions: concept art of his design of Paris’ Arts et Metiers metro stop, Jules Verne’s Paris in the Twentieth Century, the Greater Paris project, and most recently, Revoir Paris. 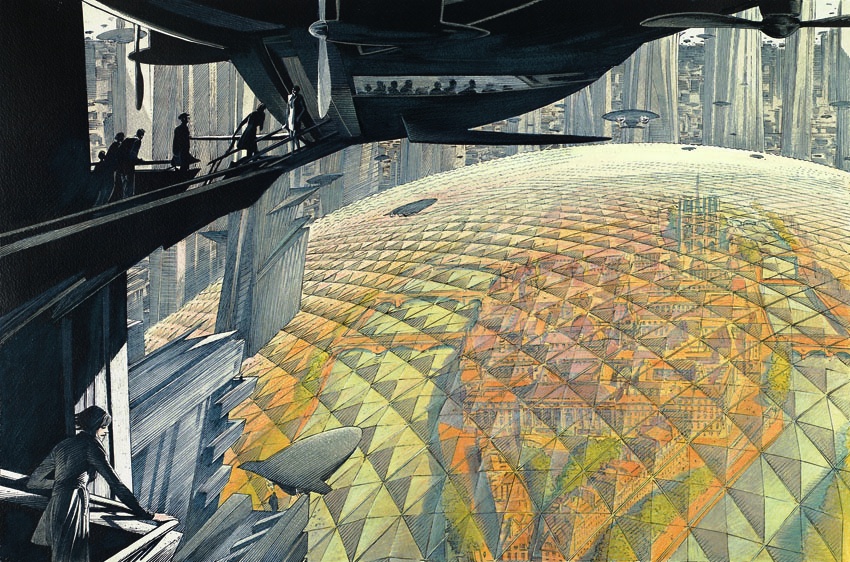 The Schuiten originals alone would have been compelling enough, but to make this exhibit even more thought-provoking, was the inclusion of tribute to those individuals that have marked two centuries’ worth of innovation of the city. Organized by themes like metamorphosis of the capital, world expositions, transportation infrastructure, the city from the sky, the periphery, and utopian spirit, these sections included classic conceptual architectural art, drawings, and models by Haussmann, Robida, Le Corbusier, Hector Horeau, Auguste Perret, Jean Nouvel, and many more. The exhibit was altogether stunning, and absolutely worthy of permanent display.

For further reading on all things related to the Les Cités Obscures universe, a comprehensive review of the exhibit, and art from Revoir Paris, check out the Altaplana website.

Barcelona has great comic shops. Like, really great. In the brief time I was there, I had time to visit three—they were all located in beautiful buildings in incredibly charming parts of town. From what I could tell, they had all done well to carve out relative niches in the scene, giving visitors reason to see them all.

I was drawn into this store by the Corto Maltese cardboard cutout perched on a balcony on the the third floor of the exterior. He was joined by two other characters that I was unfamiliar with—one manga, one fantasy—but oddly enough, the tactic worked. From the outside I could see that the space was big, so I was sure that I would find something interesting. And I did. While the independent section was minimal (but well-chosen), it was full of great selections from artists from around the world. The space was well-balanced between larger European albums, reprints of mainstream American comics, toys, and even a section devoted to selling original comic art. Not exactly my kind of store (and my Spanish is non-existent), but hey, I walked away with this charming little Marion Fayolle book, something that I’ve been interested in for quite some time. So yeah, while there’s probably something for everyone, it’s more geared to the Spanish audience. Nonetheless, definitely worth the visit. 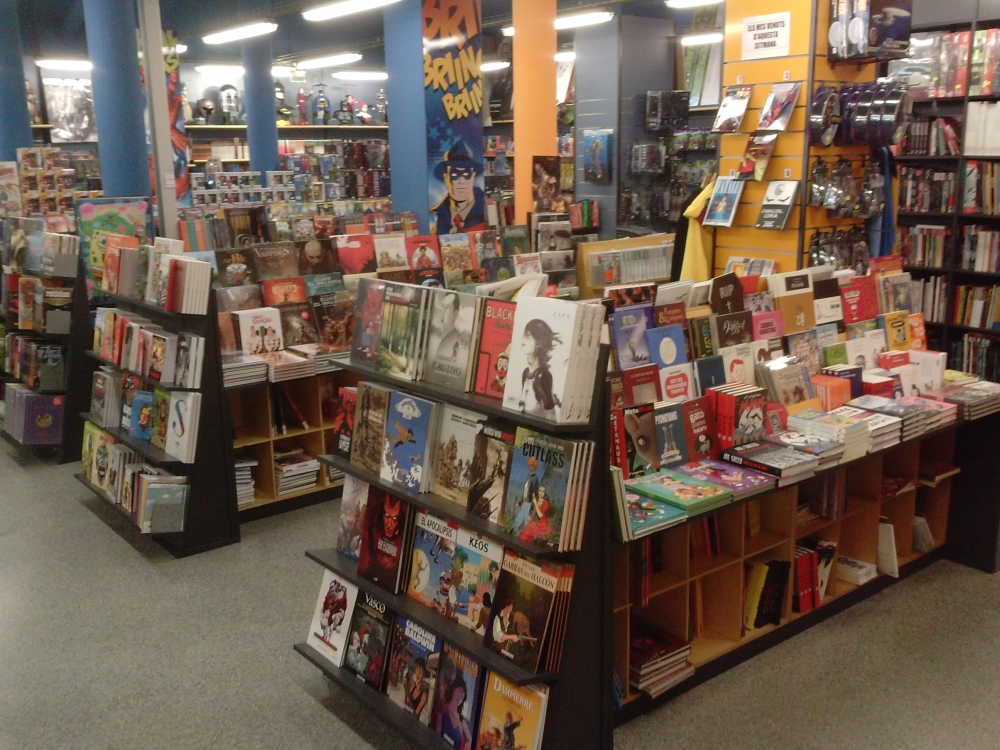 The Freaks comics shop is the midpoint in what is an impressive run of three Freaks media stores, the other two specializing in DVDs and art books. While this shop had a little bit of mainstream stuff (appropriately relegated to a tiny back room), the independent stuff is on full display here. Comprising two long center tables, the first focused on original Spanish books and Spanish-language reprints of foreign works. Regrettably, I didn’t have a whole lot of time to take notes, but I did have enough time to drool over these gorgeous Prison Pit reprints. The second table had an impressive selection of non-Spanish indie stuff from all over—Kuš, Drawn and Quarterly, First Second, Fantagraphics, No Brow, etc.—so a must stop for anyone, especially you.

When asked where in Spain I could buy books by fellow Maison des Auteurs residents Los Bravù, they replied with this. With barely a barcode in the entire store, the entire emphasis is on small press. You could easily lose an entire day browsing, so I chose the easy way out and asked the owner to pick works by his favorite Spanish artists, and threw in some Decadence (U.K.) stuff for good measure. They have an amazing website too, by the way. 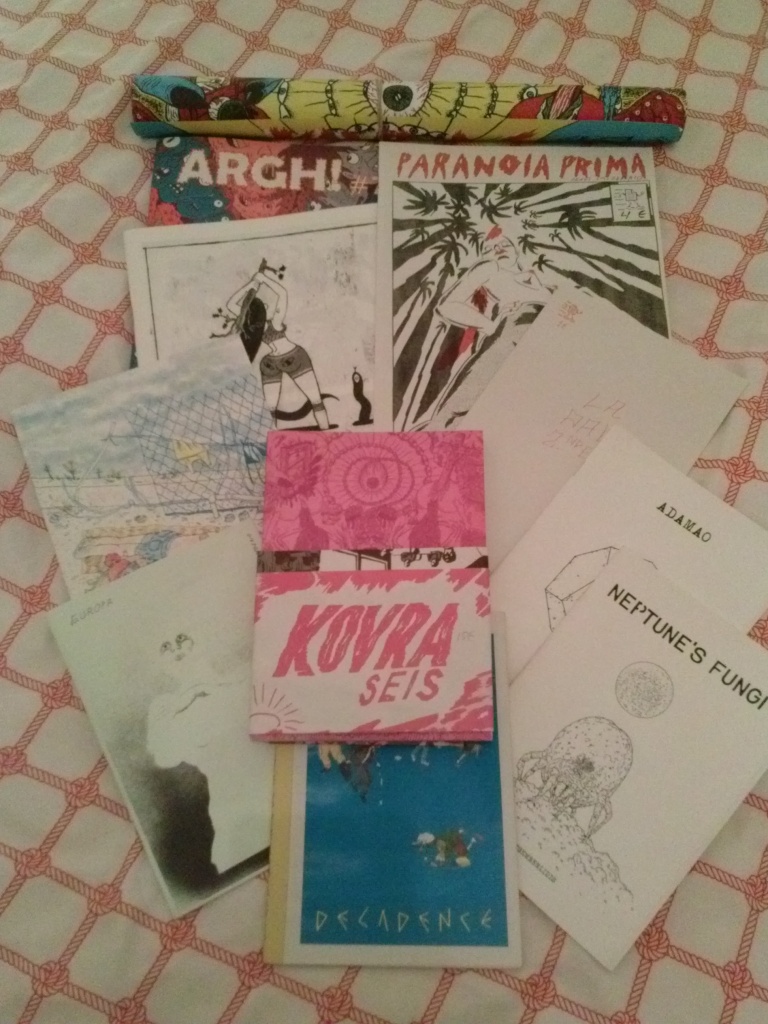 For quick reference to all of the above-mentioned spots, check out the itinerary section of the blog.